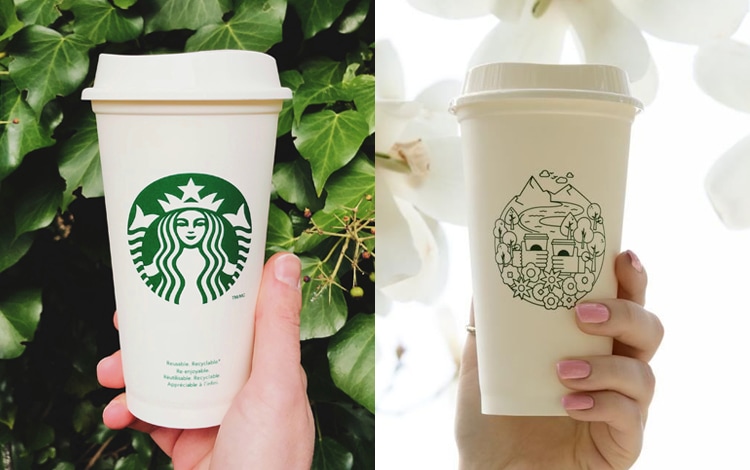 Reusable cups are also an important component of our overall waste reduction strategy. In 2013 we launched a £1 cup in the U.K. and customers save 25p each time you use a reusable tumbler.

To help reduce paper cup waste further, from Thursday 26th July 2018, across our stores in Britain we will be rolling out a 5p paper cup charge to encourage customers to bring in a reusable cup.

The move to include a 5p charge in all of our stores follows an encouraging trial we ran with environmental charity, Hubbub, in 35 stores across London earlier this year. The aim was to see what impact a charge might have on customers choosing to use a reusable and reduce single-use paper cups.

Hubbub released a report with their findings, which show that the percentage of customers bringing in their own cup or tumbler increased in the trial stores from 2.2% before the trial to 5.8% during the trial.

Why are Starbucks doing this?

We are committed to finding ways to reduce paper cup use and the roll out comes after positive trial results showed a 126% uplift in the use of reusable cups in participating stores, measured by the number of customers redeeming the reusable 25p cup discount.

What does this mean?

The charge will see all stores add 5p on to the cost of any drink purchased in a paper cup in a bid to further encourage customers to bring in a reusable cup. Customers using reusable cups already receive a 25p discount off their drink.

Where does the money go?

The funds raised from the 5p cup charge will continue to support recycling and sustainability efforts with Hubbub, with a focus to reduce plastic pollution across the UK and prompt consumers to rethink how we use plastic.

Can I recycle my paper cup at Starbucks?

We’re rolling out paper cup recycling to all of our stores across Britain – look for the sticker in the window to see if it’s available in your local store. Hand your cup to one of our baristas (we take back any brand’s cup) and they will sort it for you.

Where can I find out more?

Our Newsroom has lots of our latest news from around Europe, Middle East and Africa.